It’s fitting that I call the stories I ask women to share FinanciElle $tatements.

I didn’t know what to expect from the STATEMENT Event, a virtual event for women in finance media, from start to finish there was no shortage of thoughtful and relevant discussion, the energy in the Zoom chat was off the charts. I walked away with a huge list of podcasts, articles and books that I’m excited to dig into as well as lots of lessons learned that I know I will be digesting over the coming days and weeks and thinking about how to incorporate in what I do at FinanciElle.

What follows are those lessons learned and links to the resources mentioned.

What does the current crisis tell us about where the gender wealth gap stands and what we need to prioritize to address it?

So what’s to be done? Some things that were discussed include:

There needs to be more talk around the systems and the psychological elements around money and there needs to be re-framing of what gets talked about. There’s a shame/blame culture around finance that is frankly unproductive.

If systems work for the most marginalized groups, they will work for everyone.

Economic policy needs to include all minority groups; we’re not going to solve problems with the same types of people having the same conversations.  It starts with getting more minority women in Economics, which Anna Gifty Opoku-Agyeman Co-Founder of The Sadie Collective, and Research scholar in Economics, touches on  in her article “It Was a Mistake for Me to Choose This Field’ Black women are underrepresented in economics, which is bad for everyone.”  Marginalized groups have to constantly be proving their value by how they help someone else add to the bottom line (financially or otherwise)

The current COVID-19 crisis has just shone more of a light on inequities that were already prevalent:

The blame and shame around money needs to be couched.

I would say that the theme I picked up from this discussion was the tension that exists between being authentic to your values and making money.

Both Jessica and Gaby talked about their “Click” moment.

For Jessica, Journalist and Author, It came after learning that that the issues faced by her and her colleagues at Newsweek, as shared in “Young Women, Newsweek, and Sexism” were the same issues being faced by predecessors “Good Girls revolt: The Feminist Legacy of a Newsweek Lawsuit”.

For Gaby Dunn, it came after writing “Get Rich or Die Vlogging”.

Both are successful while being true to their beliefs, but they provided food for thought:

Gaby Dunn of Bad with Money, talked about throwing things against a wall and seeing what sticks and how things can look successful on the outside but there are consequences and feeling like she lives in 2 realities. She talked about issues that have come up when pitching ideas and even when naming her book to be aligned with her podcast, that there’s a disconnect between content creators and the gatekeepers who often have two different audiences – advertisers vs. community. Confronting things like is it a lady, gay, or money article or podcast…. and being asked if she’s concerned that some things come to her just because she’s a women, gay…because women are trending right now.

When she was talking about this it reminded me of a chapter in Nathalie Molina Niño’s book in “Leapfrog: The New Revolution for Women Entrepreneurs” entitled “Cash in on Your Woman Card” where she writes:

“Reframe it this way: You have a responsibility not just to take help when it’s offered but to find and follow every ethical shortcut you can. Otherwise you’re wasting time and money. There are so few women at the top and even fewer women of color. You’re not just striving for yourself: you’re striving for everyone who will come after you. You’re wasting their time if you don’t cash in your woman card!”

Gaby talked about how if you are in a position where you are being asked to do 2 jobs – your job + providing a gender/sexual orientation/minority/ethnicity lens on everything that everyone else does, you should be paid for 2 jobs.

She talked about doing the work she wants to do and not being precious with where it ends up. She writes and if they are giving her money to do it, there’s nothing to small. “Best case scenario that I get to keep working.” She talked about how when you create something think about all the ways you can get the most of it. If you start a podcast, think about how it can be a book in a year from now, and then a TV show in a year from that and have numbers to back it up – audience numbers.

Jessica, author of “Feminist Fight Club”, not being boxed in and being concerned when naming her book if she should call out the word Feminist or use something else and how just because she comes at things with a gender lens doesn’t mean she can’t write other things, which lead to a discussion around weighing an opportunity against the opportunity cost.

She also spoke about the false idea that to be a good feminist you have to be broke – always giving it away and splitting the check and that taboo about women saying they want to be rich.

This, in turn, lead to a discussion around calling out the relationship between scarcity mindset, guild and wealth and being open about all the things you are experience around a specific money issue.

I’m making an effort to try to capture the main points discussed and provide resources but the feeling and the energy that was coming from these conversations was palpable and moving.

Thinking Big: How to Build and Scale a Community around a Message:

One of the main points I took away from this discussion was when Jaclyn Johnson of Create & Cultivate (which by the way really looking forward to the Making Money Moves Summit tomorrow) and Work Party was talking about personal brand vs. business brand and how for the sake of Intellectual Property (IP) and scaling/selling a business, if that’s your goal – the two need to be separate if a company is to go on without you in it.

Jaclyn, and Claire Wasserman of Ladies Get Paid also talked about when to make a decision to invest in an idea, how they’re obsessed with profitability and cash flow but to know when to take a risk/gamble.

Women in Money Media – The Stories we tell About Women, Money, Equity, and Power:

This was a very powerful conversation and when asked what stories are we not talking about when it comes to money, the answer was all of them – the themes of systems and storytelling were prevalent throughout the conversation, some of the most fascinating lessons learned were:

Part of the event was the Make Finance More …challenge: 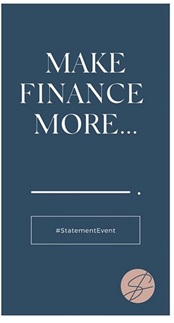 For me that’s – Feminine and I mean that in terms of what I describe in “Financial Feminism in the 21st Century” i.e. sustainable, empathic, caring….

The speakers were stellar and the conversations were honest and engaging. From the MC, Berna Anat, to the Creators of the Event Stefanie and Emma, to all the speakers, everything was truly fantastic and I can’t wait to incorporate lessons learned.

Resources that Came Up (Books/Podcasts by Speakers)

Not mentioned but related and on my list to read: