Sunday March 8th is International Women’s Day, this year’s theme is an Equal World is an Enabled World #IWD2020 #EachforEqual. The festivities start early in Ottawa with IWW, from March 2 – 9th in Canada’s Capital, Invest Ottawa will be hosting the 2nd Annual International Women’s Week with eight jam packed days of programming.

In honour of the festivities, this month’s FinanciElle Faves include things to read, listen to and watch that take a more macro and system view:

LissBeth Field Notes for Feminist Changemakers Newsletter – As a subscriber to this newsletter, I can tell you that there is no shortage of informative content – whether talking about “Gaslighting: The Silent Killer of Women’s Startups”, evaluating programs specifically for women like “Where are the Women in Canada’s Women in Tech Venture Fund?” and “Progress or Pinkwashing: Who Benefits from Digital Women-Focused Capital Funds”, or all manner of topics through a feminist lens, this is definitely one to subscribe to and read.

LiisBeth is a womxn-owned/led media co. serving enterprising feminist solutionaries working to create a just world in which all can authentically flourish on a healthy planet. #feministsforchange

I couldn’t decide between two podcasts for this so I didn’t.

The Fairer Cents Podcast – This podcast is one I listen to and love because it goes beyond talking about money tips, and touches on system issues and economic equality. It says it best on it’s website

“The Fairer Cents goes deeper to look at what really makes money such a complicated subject, especially for women, including the systemic issues that affect some of us more than others. Join us if you’re down to dig into the stickier economic issues that disproportionately affect women, people of color, non-binary people and everyone who feels marginalized by our current money culture. This is about the fight to get economically equal, not about shaming you for buying that latte or spending money on self-care.”

I had the privilege of interviewing one of it’s hosts Kara Pérez for one of my FinanciElle “$tatement interviews.

Bad With Money With Gaby Dunn – This is a podcast that I’ve listened to a few episodes of so far and it’s on my list of continue to catch up on. Systemic issues and the intersection of Finance and Social Justice are covered with humour and wit by Comedian and New York Times best-selling author Gaby Dunn.

Normally, I would list one item here; however, I’m listing a group of items that I’m affectionately calling the IWW FinanciElle FilmFest. Whether you watch these by yourself, with your friends or with your family, I highly recommend you watch. This is by no means an exhaustive list of of documentaries or films that you could binge this week, or frankly any time of year, it’s just a little starter of things that I’ve watched or plan on watching, many of which are now available on Netflix. 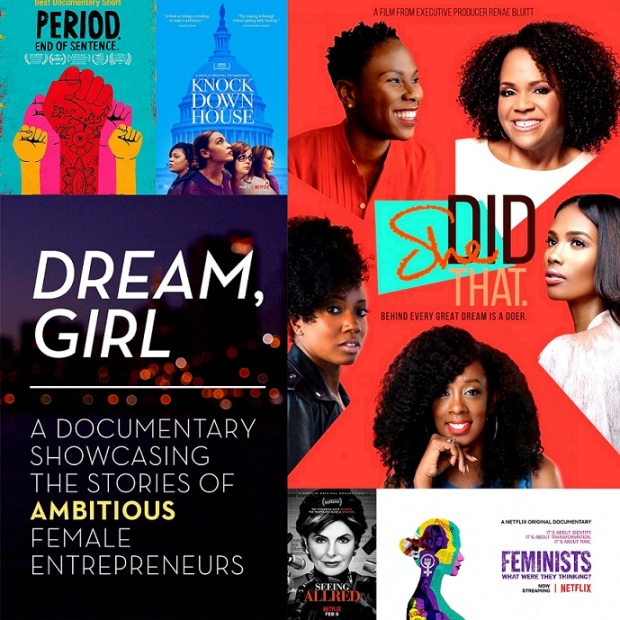 In this particular selection I picked:

Like I said, this isn’t an exhaustive list by any means, it’s just documentaries I’ve been compelled to or want to watch right now. So whether it’s these or a list you build – make sure to watch something this International Women’s Week that informs and inspires you and those around you.